Franklin is thrilled to announce the completion of our new school playground.  We hope that a few of you have ventured over on the weekends to see it (staying socially distanced from one another).  We want to share with you all of the efforts that made this playground happen.  First and foremost, Franklin is indebted to the efforts of one individual/family for making this happen...Nicole Feutz.

Nicole spent countless hours planning and fundraising for this playground, which would not have happened without her.  Nicole implemented numerous fundraisers for the last couple of school years designating money to the playground.  Family participation in those fundraisers were critical.  Those fundraisers included...Festival Food Card Sales, Scrip Fundraiser, Culver’s Family Nights, Rocky Rococo Pizza Night, The Wisconsin Herd Family Game Night, Family Bingo Night, Marco's Pizza Fundraiser, 2K Run, Bake Sales after the Holiday Concerts, Scholastic Book Fundraisers, Pizza Ranch Family Night, and the Lone Elm Pizza Sales Fundraiser.  Nicole also wrote and applied for various grants through the Oshkosh Community Foundation where she was awarded grants totaling $30,000.   Nicole worked with BCI Burke Company, LLC, in Fond du Lac and was awarded a $15,000 grant through them and KABOOM, a national non-profit organization that works to end play space inequities throughout the country.  KABOOM donated $8,000 and BCI Burke did a reduction in cost of the project of $7,000 for the total of $15,000.   Franklin also took first place for two years in a row in the West High School Homecoming Float Contest.  The two year prize total amounted to $400.  The prize money was put toward the playground..

Nicole worked with Franklin staff to plan and coordinate the design and construction of the playground, which as you can see from the pictures is constructed in our school colors and offers a variety of fun, safe equipment.  The equipment was purchased from Lee Recreation, LLC, Cambridge, WI and was constructed and installed by BCI Burke, LLC, Fond du Lac, WI.  The total cost of the project was around $66,000.  The PTO fundraising and grants from the Oshkosh Foundation contributed $47,120, the KABOOM/Burke Grant $15,000.  A special thank you also goes to Mr. Dean Birschbach, Owner, of Agromatic in Fond du Lac, who donated the use of his skid-loader for our playground project to be used to spread the wood chips. 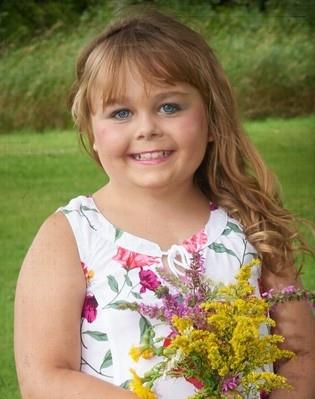 We would like to give a special thank you to the families of Eleanor Hansen.  Eleanor "Ellie" passed away on January 30, 2020.  She was in 5th Grade at Franklin School at that time.  Her family, along with Julie's Touch of Silver, donated $2,000 to the Franklin Playground Fund in her memory.

Another thoughtful OASD student we would like to recognize is Ansel Blondheim for donating his birthday money to the Franklin Playground Fund.

There is still time to participate in the Scrip PTO Fundraiser.  The order deadline is December 4.  Get your order in TODAY!

Franklin PTO SCRIP Fundraiser.  It is an easy way to raise money for our school by purchasing gift cards that you were already going to buy for this holiday season.  Follow the directions on the information flyers.  The cards will be available for pick up at Franklin School on Thursday, December 10, from 7:30 am to 6:00 pm or by appointment on days after December 10.  This will also be a supplies exchange day for our students in the Virtual A/B Learning Model.  We do welcome our E-Academy Families to participate in this fundraiser as well.

The PTO exhausted a very sizable amount of their funds toward our playground project, so your participation in this fundraiser is greatly appreciated.

Franklin will hold another Supplies Exchange this next week on Thursday, December 10, from 7:30 am to 6:00 pm.  If these times do not work for you, please do not hesitate to call the office to arrange another time.  These exchanges are very important in order for us to get books back from you so that we can process them and get them out to other students.

DIRECTIONS: Pull up single file to the front of school and park at the curb in the circle drive.  Get out of your car and drop off any supplies/books you are returning in the appropriate grade level bin.  Show a paper with the name and teacher of the student to the staff working through the front entrance window.  The staff will then bring your supplies out to you at the door; please wait outside (not in your car) for them to deliver your child's things.  Always remember to stay 6 feet apart and wear a mask.  Thank you for your cooperation.

Students may continue to place books on hold:  Destiny Directions

Once you place a book on hold you will receive an email saying the book is ready for pick up. After receiving the email, please reply with a specific day and time you can come to pick up between 8:30 - 2:30.  Please return the book(s) you currently have checked out when coming to pick up a new book.

Items not picked up within 5 days will be checked back in and re-shelved.

Step One: Problem-solve by using these Chromebook Troubleshooting Tips.

Step Two: If students are unable to solve the problem on their own, they should fill out a Pawprint and a staff member will be contacting them to help solve the problem.  A Pawprint link is located on the student quick link page as well as below.

Step Three: If media staff determines that the student device needs to be sent in for repair,  and if the family is not under quarantine or experiencing symptoms, a drop off time will be set up. District Learning without Limits Handbook expectations apply to all devices in all learning models.

Video #1 Getting Ready to Write.webm 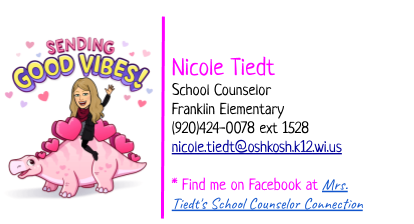 I’ve created a mailbox for you to reach me by clicking on the following link: Mrs. Tiedt's Parent Referral Mailbox. You may also reach me via email: nicole.tiedt@oshkosh.k12.wi.us or by phone at 920=424-0078 ext 1528.

During this time, I am sharing Social Emotional Learning with the students and families on my Facebook page. Click here to join Mrs. Tiedt's School Counselor Connection on Facebook. I also have a Google classroom to reach out to third through fifth grade students and I have a topic in each of the Kindergarten through second grade Google Classrooms. Please remind your student to check out my classroom for mindfulness activities, read-a-louds and social emotional lessons each week. Please ask your student about the website that I’ve created for them as well. Click here to check out Mrs. Tiedt's Counselor Connection.

This is a stressful time for everyone. Remember we are here for you. Although we can’t all be together right now, we are here for you. If you need anything, check out this Oshkosh Area Community Resources link. Don’t be afraid to ask for help. We are all in this together. We’ll get  through this.

Check below for what’s happening this month!

Thinking of you all!

In December we are focusing on gratitude and resilience! During times like these it is hard to remember what we are grateful for. This is  a time when we must try to find those things that we appreciate and learn to be thankful for what we have and to be resilient. Resilience is the ability to overcome adversity in ways that maintain or promote our well-being.

I LEARNED THAT COURAGE WAS NOT THE ABSENCE OF FEAR, BUT THE TRIUMPH OVER IT. THE BRAVE MAN IS NOT HE WHO DOES NOT FEEL AFRAID, BUT HE WHO CONQUERS THAT FEAR.  Nelson Mandela

IT IS HARD TO FAIL, BUT IT IS WORSE NEVER TO HAVE TRIED TO SUCCEED. Theodore Roosevelt

Franklin will be collecting food and hygiene items for the annual Mid-Morning Kiwanis Food Drive.   Any canned and/or non-perishable food items or hygiene products that you can donate would be greatly appreciated.  Collection dates will be during upcoming supplies exchange dates:  Thursday, November 19: 7:30 am to 6:00 pm and Thursday, December 10:  7:30 am to 6:00 pm

Please click on the following link to view view information about this year's Salvation Army Oshkosh Seasonal Assistance Program including Coats for Kids Sign-Up and Toys for Tots:

We all know that it's important for kids to get their sleep but actually getting them into their beds after a long day of virtual learning isn't easy. In this edition you will find the whys of sleep and ideas to help get your child into bed.